RepRap 3D printers with multiple extruders are becoming increasingly common however the majority tend to have dual extruders rather than 3 or more. Released in December 2013, the Duet 0.6 is now an established 32bit 3d printing electronics solution that has proven to be popular and versatile. With this in mind we decided to extend the Duet 0.6 to support two extruders on one board and developed the Duet 0.8.5.

The new features are highlighted below and importantly it features the same expansion header as the Duet 0.6 so it supports a Duex4 expansion board. A Duet 0.8.5 + a Duex4 gives support for 6 extruders. That's 9 stepper channels and 7 heater channels including the heated bed! 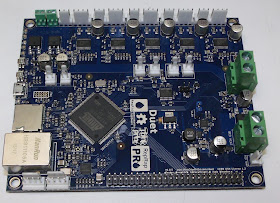 We should thank David Crocker (DC42 on the RepRap forums) upfront for his helpful advice in the development of the Duet 0.8.5.

Not necessarily improvements but changes to simplify the board or reduce component count:


The expansion header pins have changed slightly as shown in the picture below:

In the same manner as the Duet 0.6 the Duet is based on the Arduino Due, and the KiCAD source files are released under the CERN OHL 1.2 license, which means you are free to modify them and distribute products based on them, as long as you share your modifications under the same license. We believe this is a much more appropriate license for Open Hardware than a Creative Commons/GPL or other licence based around copyright.

The Duet 0.8.5 source files are available on GitHub so feel free to fork the project and modify away!


KiCAD has continued to improve since I started to develop hardware over 2 years ago. It is a powerful, Open Source design suite which means that the source files for the Duet are open for anyone to use and so is the software needed to modify them.

The Duet 0.8.5 runs RepRapFirmware, the linked github page has the Think3dPrint3d latest version based on David Crocker's fork. I have made the changes required to support the additional pins, extruder multiple PWM fans and hopefully this will be merged into David's fork shortly.

The firmware has also improved substantially since the Duet 0.6. The majority of these improvements Think3dprint3d can take no credit for as they are the work of the RepRap community.

David Crocker has done excellent work in optimising the firmware and implementing segmentation free support for Delta printers. Old-style firmwares rely on segmentation to calculate movement but this can add printing artefacts. On David's fork the delta transform is calculated for each step, i.e. it's segmentation free, and thus the quality is higher. This is only possible due to the higher processing speed of 32 bit electronics.

Christian Hammacher (on the RepRap forums as zombiepantslol) has done a fantastic job continuing to improve the web interface:

I am now also using the webinterface from my mobile, here are a couple of screenshots of that:

The Duet 0.8.5 boards are being produced for us in the UK by a local electronics manufacturer. The first batch is finished and available on our website:


Also available as a bundle with the Duex4, and I will be very excited to see someone using all 6 extruders!

Comments are now moderated to reduce spam, please excuse the additional time this will entail.